Information about the Village, the Parish Council and events in the Village Hall 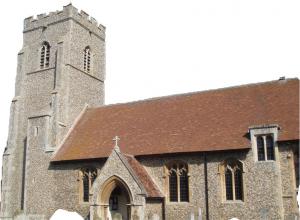 This flint and stone church standing in a prominent position above the village is on ancient site, the churchyard shows an oval shape indicating, possibly, a very old burial area surrounding the church. Freckenham, mentioned in Doomesday book and known to be an ancient settlement, its church had a large chancel built by the early thirteenth century; the east window of three lancets, of "early english" style is of 1300 and contains stained glass by Hardman of 1867 - considered to be one of several good examples of his work in East Anglia.

The nave and north aisle followed a century after the chancel. The tower (rebuilt in 1884 after falling in December 1882) is of the fifteenth century and 62 feet high. There are two tomb chest lids evident in the churchyard and another built

Set in the south wall of the chancel is a double piscina - quite a rarity and datable to the late thirteenth century. There are some animals carved in the stone bosses around the altar (a lizard ? above the piscina) and some decoration around the windows complete the medieval evidence in the church together with the nave benches - remade several times! have fine poppy heads and figure carvings of the fifteenth century and the timber roofs to the chancel (with large, intricate bosses and victorian colour) and nave, are at two different levels indicating that once the external roof line was different to now. into the wall of the stove cellar - under the north aisle. Set in the north aisle wall in 1776 is an alabaster plaque (from a fifteenth century reredos) of St Eligius - the patron saint of blacksmiths and metalworkers.

In 1867 a large scale restoration took place - GE Street was the architect and produced the church much as it is today. Although the stonework was renewed with a russett limestone (different to the coarse' cream limestone) much use was made of the old materials, leaving an intriguing puzzle to unravel, to understand what the church looked like with thatched roofs and a variety of windows and floor levels. Street re ordered the chancel, placing the altar on the ritual 7th step above the nave floor. Much of the woodwork was restored, happily the seventeenth century altar table was kept (in the vestry until 1964, when it was moved to the north aisle). The Commandments Boards that once were in the chancel together with the canvas paintings of the Lord's Prayer and the Creed - of 1845 were stored in the vestry, now have been restored and replaced in the chancel.

The plain, old font was placed against pillar in the north aisle - in line with the north and south doors, it was moved onto the flagged area in the 1960's when all the wooden floors were renewed and the benchs remade to stand away from the walls - to prevent further rot. After 1867 the choirstalls were put in. The pulpit of Caen stone was put in in 1884, the lectern was loaned to Freckenham church (from Chippenham) in 1899. An organ was built of used parts (possibly by Jones of London) in 1867 and placed at the east end of the north aisle and then turned through ninety degrees in 1930. In 1994 it was moved to the west end of the nave to be replaced in 1997 by the present instrument, a nineteenth century organ built by Bedwell for St Peter's church in Bury St Edmunds.

In the 1960's the roof was retiled, the south side has the original clay tiles from 1867 but the north side has modern cement ones, the nave and north aisle windows have been re glazed with clear glass and some victorian benches removed to give a more spacious layout to nave and aisle. The golden carpet and kneelers have been given and a modern Morris design curtain hanging behind the altar table in the aisle replaces a pair of Morris and Company portieres of 1890 given in 1970. The tower roof was releaded recently and the north aisle roof repaired.

The church plate includes an Elizabethan cup, fairly typical of East Anglia, repaired several times and has "FRECKENHAM CHURCH" inscribed on it (last century); a patten of 1723, an 1890 copy, a large flagon of 1854, a small rosewater jug of the late nineteenth century (given by Revd Henry Henman and bought in Paris) and a modern (1960's) chalice and patten and wafer box. The brass candlesticks are contemporary with the restoration and the altar cross was the gift of Mrs Sarah Pattenden in 1896 to commemorate her 96th birthday. The Revd Henry Henman was responsible for the stained glass in the south chancel windows, he recorded (in the margin of one of the church registers) how he was assisted by his gardener in putting in the glass. The font cover was given in 1972 and designed by Jack Penton. There is another font cover (from Worlington) of plain deal and probably of the early nineteenth century, stored in the tower.

In the nave hangs a painted canvas (of 1825) records the 1710 bequest of a cottage and nine acres of land to provide an income to buy "stuff gowns for the poor women of the parish". This was restored in 1970 by Tom Keating !

In the tower hanging in a nineteenth century softwood frame are five bells inscribed:

There is a list of rectors and vicars dating back to 1070. The church registers (other than the ones in current use) are in the county archives and date back to 1550, but the Revd. William Chapman re wrote the first seventy five years in 1625, but his handwriting deteriorated as he aged and his final entries later on in the seventeenth century are difficult to read. There are several interesting notes in the registers such as an eclipse of the sun that occurred during a burial. In the archives is the tithe book of seventeenth century, written at a time when the tithes were beginning to be paid in cash instead of produce.

External link to St Andrew's Freckenham on the Suffolk Churches web page where photographs of some internal detail can be seen.